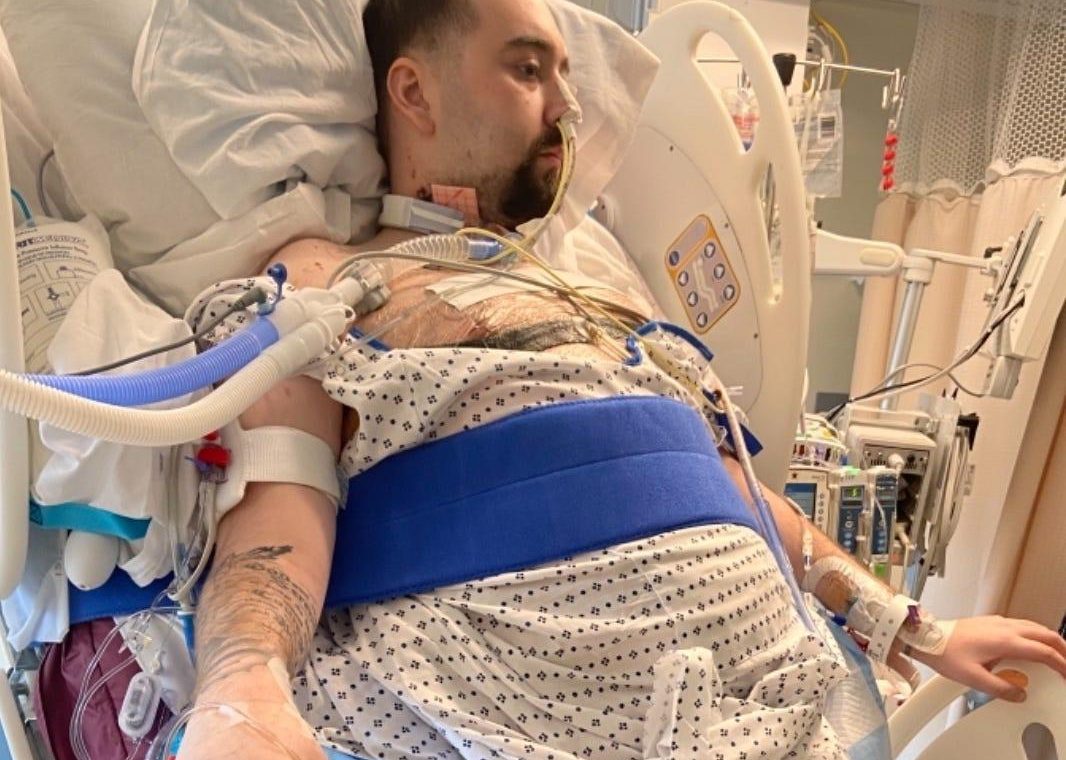 A Georgia man had to get a double lung transplant after he got COVID-19 in April.

Blake Bargatze had no underlying health issues but was not vaccinated before he fell ill.

The 25-year-old told Insider the virus made his lungs look like “chewed up pieces of bubblegum.”

A 25-year-old man who had to get a double lung transplant after falling ill with COVID-19 in April said the virus made his lungs look like “chewed up pieces of bubblegum.”

Blake Bargatze from Georgia, who had no underlying health issues, was admitted to ICU earlier this year after he fell seriously ill from the coronavirus.

During his stay, his condition worsened and doctors told him to survive, he needed a new set of lungs. In June, he got a double lung transplant.

The 25-year-old told Insider he was shocked at how quickly COVID-19 attacked his body.

“It just ate away my lungs,” he said. “They literally looked up like chewed up pieces of bubblegum by the time they took them out. They were riddled with holes. I was just fortunate enough to not have multiple organ failures.”

Bargatze is among the few people to have successfully received a double lung transplant as a result of the coronavirus, which has so far killed more than 687,000 Americans, according to a tracker by Johns Hopkins University.

He believes he contracted the virus at a concert in Florida back in March, which he now regrets attending. Although he was wearing a mask, he was not vaccinated at the time.

This is in part because he wasn’t eligible for a vaccination yet, but also because he wanted to wait and was worried about the side effects, according to his mother.

She told WXIA: “He wanted to wait until it was out like 10 years or so, kind of like a lot of the population wants it to be out longer.”

But now, the 25-year-old is urging other people to get their vaccinations.

“I’m trying to make people become more aware of what realistically can happen with this virus. It’s just not worth the risk,” he told Insider.

He also said that many people are still being “reckless” even as the highly infectious Delta variant continues to cause a rise in hospitalizations, especially among those who are unvaccinated.

But life is looking up for the 25-year-old, who hopes he can soon return to his favorite hobbies, including fishing and playing pool with his friends. He is due to go back to work this week, something he says is “a huge achievement” for him.

Although he is still taking 50 pills a day, Bargate is happy to be walking again and is “grateful to be alive.” He has since also gotten both his COVID-19 vaccinations.

A GoFundMe page has since been set up to help Bargatze’s family pay for his medical bills.

Don't Miss it China's coronavirus-fuelled surfing boom – BBC News
Up Next Some say COVID-19 vaccine is the ‘mark of the beast.’ Is there a connection to the Bible?