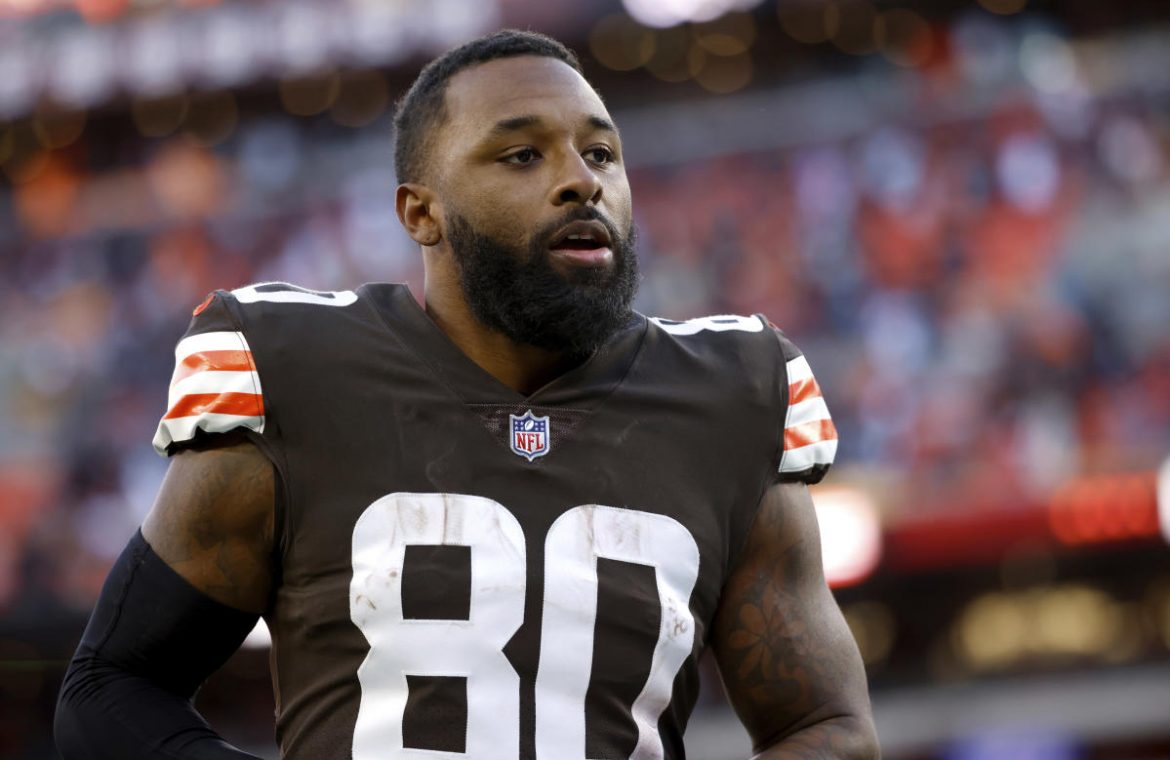 CLEVELAND (AP) — For the second straight season, the Cleveland Browns are dealing with a major COVID-19 outbreak during their playoff push.

Those players will all likely miss Saturday’s crucial game against the Las Vegas Raiders (6-7).

Defensive end Takk McKinley was also placed on the list with backup guard Drew Forbes, who is on injured reserve, as well as receiver/returner JoJo Natson and tight end Ross Travis from the practice squad.

They join tight end David Njoku, linebacker Anthony Walker Jr. and punter Jamie Gillan, who were also placed on the list and missed Sunday’s 24-22 win over the Baltimore Ravens.

The loss of Landry is especially tough for Cleveland’s sputtering offense. He’s played well lately, catching his first touchdown pass of the season in Sunday’s win as well as being quarterback Baker Mayfield’s prime target.

Landry leads the Browns with 38 receptions for 397 yards, and Hooper is second with 33 catches. He also caught a TD pass against the Ravens.

The Browns (7-6) are in the thick of a tight playoff race in the AFC and can’t afford any more losses.

With the short week, it’s going to be difficult for any of the affected players to be available. To be eligible, any vaccinated player on the COVID-19 list must be asymptomatic and have two negative tests in a 24-hour period.

An unvaccinated player must sit out 10 days.

The Browns were one of the NFL’s hardest-hit teams by COVID-19 a year ago. They played without star defensive end Myles Garrett down the stretch; didn’t have Landry and three other receivers in a December game at New York and still managed to end their long postseason drought.

They were without coach Kevin Stefanski and Pro Bowl guard Joel Bitonio for their wild-card win at Pittsburgh after they tested positive.

This is nothing new to the Browns, but that doesn’t make it any easier.

“We’ll get our work in,” Stefanski said prior to Tuesday’s walk-through. “That’s what we do. We’ve done it before.”

Stefanski was confident his team could handle the latest adversity.

“We’ve got pros,” he said. “Those guys understand what’s really important is this game on Saturday. It’s a good opponent. It’s an AFC game and we’ve got to come ready to go.”

Stefanski would not divulge any plans to replace Teller or Wills up front. An obvious option is versatile linemen Blake Hance, who has played guard and filled in for 2020 All-Pro right Jack Conklin (out for the season) before being replaced by rookie James Hudson III last week.

The Browns began their short week by being placed in the league’s enhanced COVID-19 protocols. Because of the new positive cases, they’re holding all meetings virtually and personnel must be masked indoors. The team also closed its practice to reporters.

On Monday, the NFL sent a memo telling teams that front-office staff and other personnel must get a COVID-19 booster by Dec. 27. The requirement comes as the league tries to combat an uptick in positive cases around the league.

“We’ve definitely educated players and staff on the booster,” Stefanski said. “I’m not going to get into specifics with that. I can tell you I’m boosted because that doesn’t violate any laws.”

Don't Miss it Man whose wife won a court battle to treat his COVID-19 with ivermectin has died
Up Next One chart shows the most common COVID-19 booster side effects from Pfizer, Moderna, and J&J’s vaccines