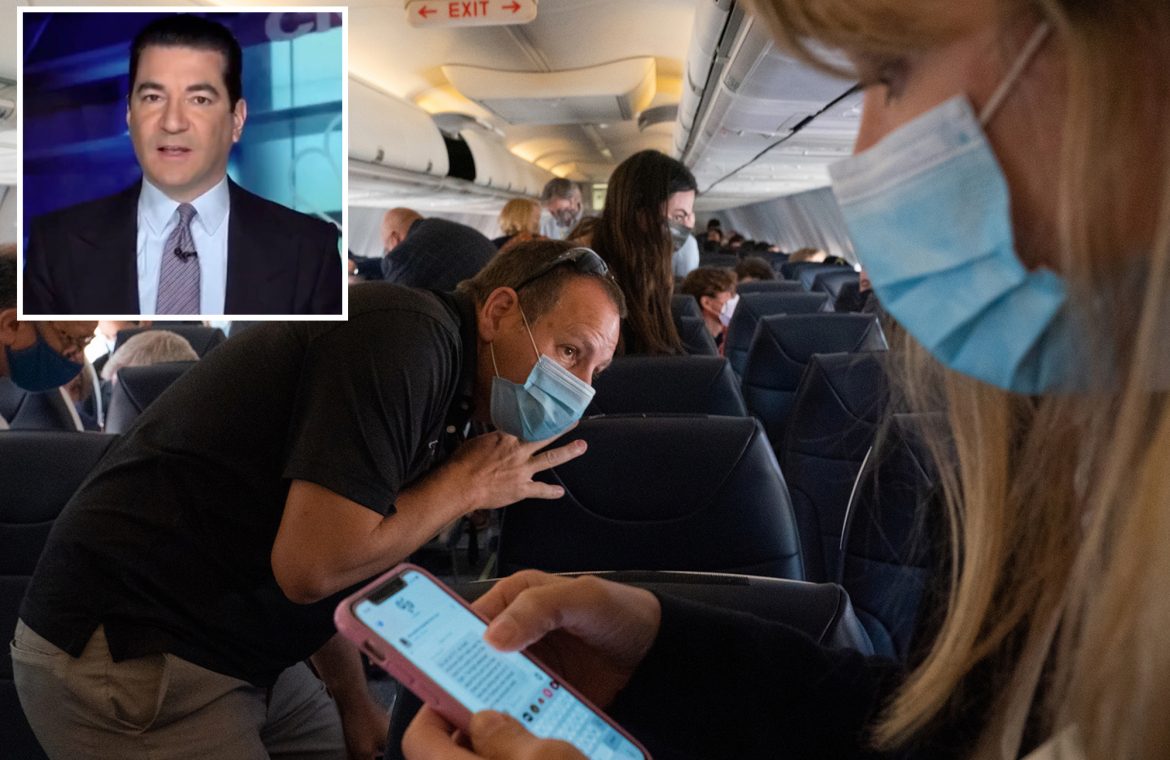 The former chief of the Food and Drug Administration predicted Wednesday that the federal mask mandate for airplanes and other public transportation will be lifted next month if the US isn’t battling a COVID-19 surge fueled by the highly contagious Omicron subvariant BA.2.

Dr. Scott Gottlieb, who ran the Food and Drug Administration from 2017 to 2019, said he expected President Biden’s mask mandate for federal public transportation to be lifted when it expires on April 18.

The Biden administration seemingly “backed into” the April 18 deadline, Gottlieb said, after extending it earlier this month on the recommendation of the Centers for Disease Control and Prevention. The move means Americans will still need face coverings on planes, trains and buses, as well as inside public transportation facilities until at least the middle of next month.

Scott Gottlieb (right) said he fully believes mask mandates will be lifted on airlines next month provided there are no surges of COVID-19.CNBC

The CEOs of major US airlines called on President Biden to drop the “outdated” mask requirement on planes and at airports in an open letter last week.Brandon Bell/Getty Images

Gottlieb said he agreed with lifting the mandate if the BA.2 Omicron subvariant that’s been detected in dozens of countries isn’t raging in the US.

“My view was that they should lift that requirement on airlines,” Gottlieb told the outlet.

But if infections continue to rise in early April, the mandate would likely be extended, Gottlieb reiterated.

“They’re going to be hard-pressed to lift that and they’ll probably kick it out another month,” Gottlieb said of that possible scenario. “If we’re actually seeing a wave of infection — we’re unclear how large it’s going to be — I think it’s very hard to lift it in that kind of a backdrop, so you’ll probably extend it a month.”

While Gottlieb said infections in the US are rising, it’s not a dramatic spike and they’re starting to drop in Western Europe — perhaps signaling brighter days ahead in the ongoing global pandemic fight.

The Biden administration seemingly “backed into” the April 18 deadline, after extending it earlier this month on the recommendation of the Centers for Disease Control and Prevention.Joe Raedle/Getty Images

Passengers wear face masks to protect against the spread of the coronavirus as they arrive on a flight from Asia at Los Angeles International Airport on January 29, 2020.MARK RALSTON/AFP via Getty Images

At least 974,277 COVID-19 deaths have been tallied in the US as of Sunday, according to CDC data. The daily case average stands at 27,594.Bing Guan/Bloomberg via Getty Images

“So it could be that this BA.2 wave that we’ve expected could be a brief wave — it won’t be a very big wave of infection — and against that backdrop, I think they can continue to lift it,” Gottlieb said of the federal mask mandate.

The CEOs of major US airlines, meanwhile, called on President Biden to drop the “outdated” mask requirement on planes and at airports in an open letter last week, claiming they no longer “make sense” as hospitalization and death rates steadily decline.