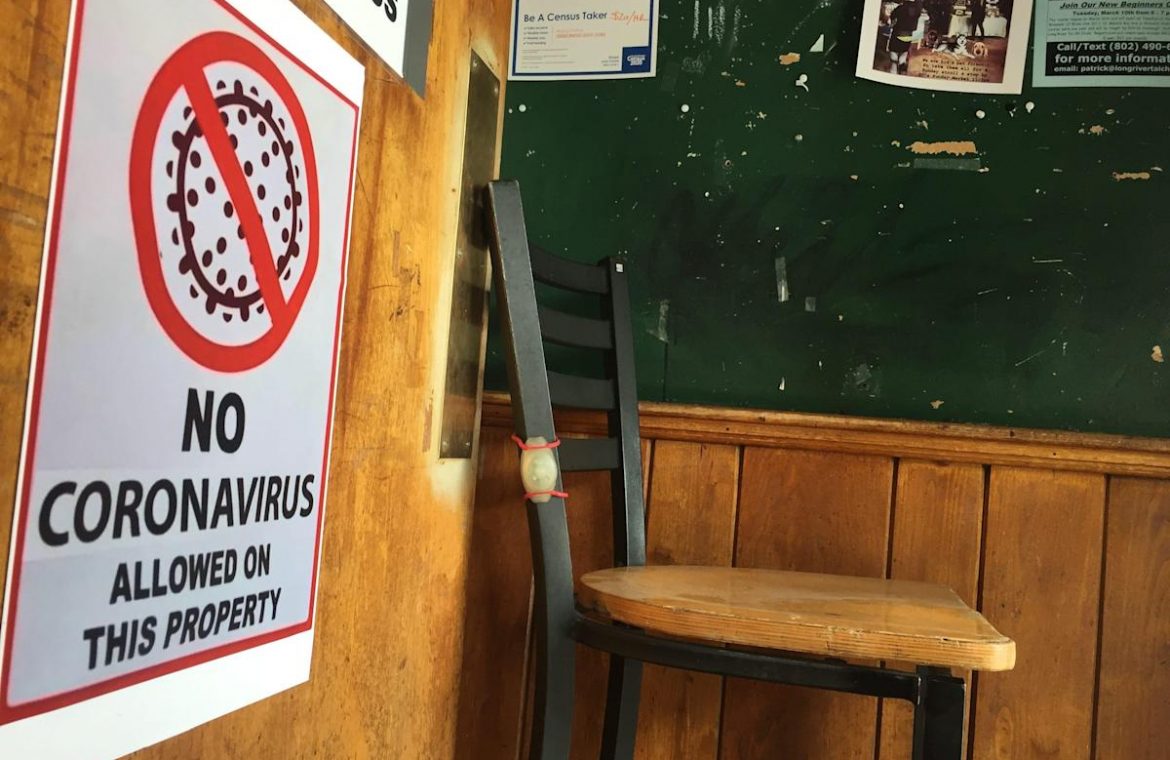 As Vermont reports higher than ever COVID-19 case rates, state health officials have been trying to understand why.

How can a state that did so well during the first part of the pandemic — even garnering national recognition — be doing so much worse now?

“There is not one simple answer,” said Vermont Health Commissioner Dr. Mark Levine during a news conference Tuesday. “But, there are clearly factors that have come together to create the situation that we’re in now.”

Signs and posters that were up as the COVID-19 pandemic arrived in March 2020 remain on display July 20, 2021 at Esox bar in Burlington.

Slowing the spread is critical right now to prevent Vermont’s hospitals from being overwhelmed with people sick with the virus, Levine said. He encouraged Vermonters to take the same preventative steps that have been preached throughout the pandemic: wearing masks, practicing physical distancing, staying home when sick and getting vaccinated.

“There’s not one single solution to stop it,” Levine said. “We do need to live with it, taking the simple and common sense actions for protecting one another as much as we can.”

Positive cases have been climbing in Vermont in recent weeks despite the state’s having one of the highest vaccination rates against the virus in the U.S. Cases rose last year around this time as well as people spent more time indoors, but the state still enjoyed one of the lowest case rates in the country then.

Cases in Vermont have increased by about 55% over the last 14 days, according to a modeling report by Financial Regulation Commissioner Mike Pieciak. Some recent days have seen daily cases spike above 400 — the highest Vermont has seen since the beginning of the pandemic.

A store on the Church Street Marketplace in Burlington announces its mask policy on Saturday, Aug. 28, 2021.

Over the past week, Vermont had the 12th highest rate of new cases in U.S., according to Pieciak’s report.

Unvaccinated Vermonters are still the people getting sick and being hospitalized at the highest rates. Infection rates among people in their 20s and children have also contributed to the most recent surge, Levine said.

Why is this happening?

The highly contagious delta variant is still one of the main factors affecting cases in Vermont, as it has been for most of the year, Levine said. The variant has even been able to spread among vaccinated people.

“An infected person can spread the virus to five people or more, far faster than the original strain,” Levine said. “This means it can spread faster than we can trace and alert contacts.”

The state’s early success during the pandemic has also turned out to be one of the factors in its downfall this year, Levine said. There were fewer Vermonters who got sick early in the pandemic, but this also meant that fewer residents were able to build up any level of immunity from having the virus.

Vermont Health Commissioner Dr. Mark Levine speaks at a news conference Monday June 14, 2021 in Montpelier, Vt. On Monday Gov. Phil Scott announced that the state had reached its goal of vaccinating 80% of the eligible population. As a result Scott lifted all remaining COVID-19 restrictions that were imposed to deal with the pandemic.

Studies estimate that 3% or less of Vermonters had any immunity to COVID-19 before the delta variant hit, Levine said.

Vermont’s success in vaccinating its residents quickly, starting with the oldest Vermonters, means immunity among the highest-risk people in the state is likely waning now, Levine said.

“As one of the oldest states, the percentage of Vermonters in this situation is higher than most other parts of the country,” Levine said.

Finally, Vermonters are also traveling more and hosting visitors, often taking part in indoor activities, more frequently than they would have at this time last year. They are also wearing masks less often. These behavioral changes have also contributed to the current situation, Levine said.

“I know for many of us it can be frustrating to see Vermont looking so different from how we once did during the pandemic, but even after all this time, the virus is not something we have absolute control over,” Levine said.