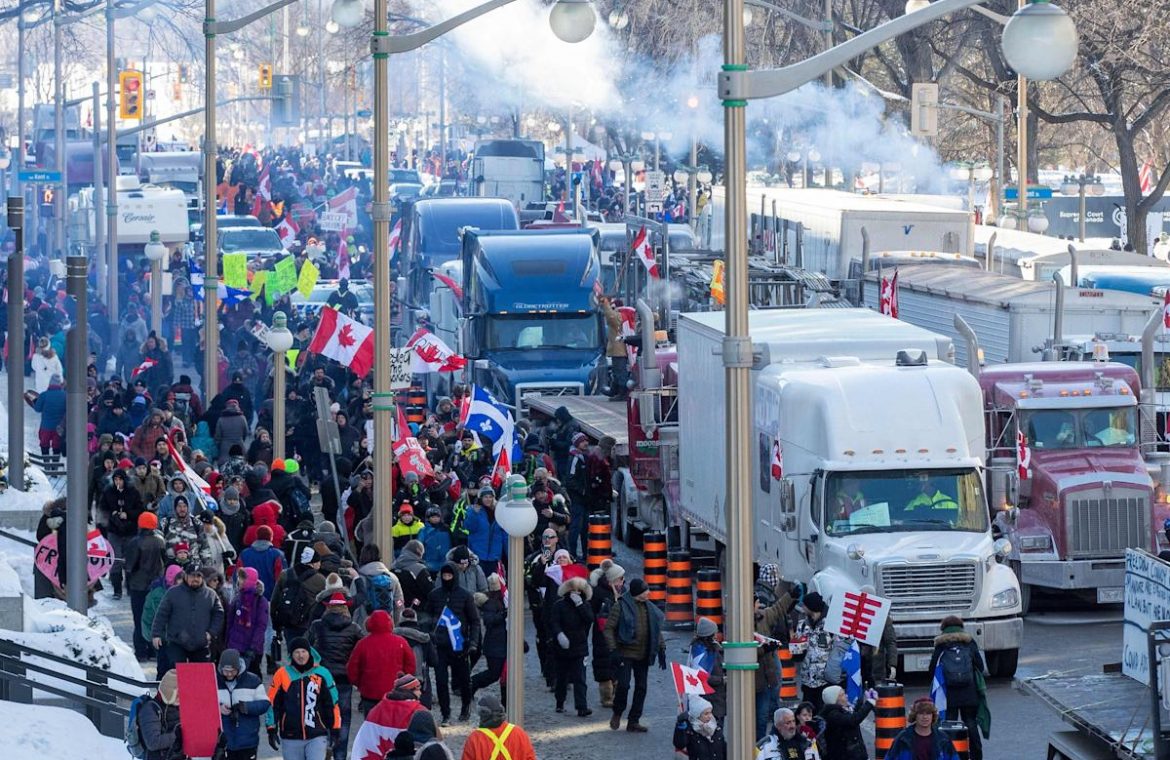 Supporters arrive at Parliament Hill for the Freedom Truck Convoy to protest against Covid-19 vaccine mandates and restrictions in Ottawa, Canada, on January 29, 2022.Lars Hagberg/AFP/Getty Images

After nearly a week of driving, Canadian truckers arrived at the nation’s capital this weekend.

What began as a protest against vaccine mandates evolved to include opposition to other measures.

Trudeau was moved as a precaution, but as of Saturday evening the protest remained peaceful.

Prime Minister Justin Trudeau and his family were moved from their home in Ottawa to a secret location as thousands of people descended on Canada’s capital Saturday to protest vaccine mandates for truckers and other public health restrictions.

Trudeau was relocated over security concerns earlier in the day, CBC reported, though the protests had remained peaceful as of Saturday evening, with no charges brought against any demonstrators, Ottawa police said.

Truckers began arriving on Friday after nearly a week of driving across Canada. The “Freedom Convoy” began as a protest against COVID-19 vaccine mandates for truckers who travel over the US-Canada border.

Canada’s mandate, imposed on January 15, requires truckers to present proof of vaccination in order to cross the border. Truckers without a vaccine are required to quarantine and take a COVID-19 test when they return from the US.

A similar mandate for truckers in the US was imposed on January 22.

Insider’s Grace Kay previously reported that the mandates could worsen supply shortages and price increases in both countries. Trudeau said at a press conference Monday that the vast majority of Canadian truckers were already vaccinated.

Supporters arrive at Parliament Hill for the Freedom Truck Convoy to protest against Covid-19 vaccine mandates and restrictions in Ottawa, Canada, on January 29, 2022.Lars Hagberg/AFP/Getty Images

“Almost 90% of truckers in Canada are already vaccinated, and the best way to continue to prevent supply chain disruptions is to ensure that everyone gets vaccinated,” he said.

Since the convoy began, the protest has evolved to include other groups and people who are not truckers who oppose a variety of public health measures and government overreach in the pandemic. On Saturday, big rigs and people on foot filled the streets around Canada’s parliament as police monitored the crowds.

“I’m not able to work no more because I can’t cross the border,” Csava Vizi, a trucker who said he was the primary provider for his family, told Reuters from inside his truck outside parliament. “I refuse the vaccine.”

One Ottawa resident present and carrying a sign that said “Justin Trudeau makes me ashamed to be a Canadian” told the outlet: “Myself and a lot of other people are here because we’re just sick of the vaccine mandates and the lockdowns.”

Despite security concerns in the days before the protest, Reuter reported the scene was peaceful and mostly “felt like a very cold street party, punctuated by blaring truck horns.”