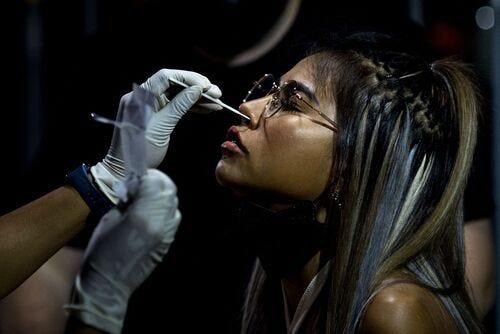 Health officials have long wondered how many people who get COVID-19 show no symptoms. Because those who don’t feel sick rarely get tested, experts have only been able to estimate the number of such asymptomatic cases.

But new research now shows more than 40% of those who tested positive for COVID-19 were asymptomatic, according to the study published Tuesday in JAMA Network Open.

“Across the board, it showed that among the elderly, two-thirds had symptoms, and among the 20- to 30-year-olds, about two-thirds didn’t have symptoms,” said Dr. Alan Wells, medical director of UPMC Clinical Laboratories and professor of pathology at the University of Pittsburgh School of Medicine, who is not affiliated with the study. “That’s what we see in a lot of respiratory viruses.”

The study also showed the highest number of asymptomatic cases occurred in nursing home residents or staff, air or cruise travelers and pregnant women. That doesn’t mean those populations were more susceptible to asymptomatic infections, Wells said, just that they were more likely to be tested.

Nursing home staff and residents underwent frequent testing throughout the pandemic, international aircrafts and cruise ships required a negative test before boarding and pregnant women were tested at every doctor’s appointment.

“If we had a more comprehensive testing program that sampled everyone in an unbiased way, we would pick up more (asymptomatic cases),” Wells said.

While 40% of COVID-19 infections overall were asymptomatic, they represented only .25% of the tested population. But health experts say it’s still a cause for concern. It’s also likely an underestimation as testing was not widely available in many countries during the study’s timeframe.

“A quarter of a percent of the tested population ending asymptomatic, that doesn’t seem like a very large amount,” said Mark Cameron, infectious disease immunologist as Case Western Reserve University School of Medicine. “However, when you multiply that by the hundreds of millions of people around the world, that’s a significant amount of people transmitting the virus that’s falling through the cracks.”

Future vaccine technologies: A year after first COVID-19 vaccine, here’s what’s next for researchers – and what worries them

The proportion of asymptomatic cases among confirmed cases of COVID-19 is also worrisome as previous studies found such people may not be as protected against reinfection compared to those who have moderate symptoms, Cameron said.

The Kentucky Department for Public Health and a local health department investigated two outbreaks at a nursing facility, one in July 2020 and the second in October 2020. Researchers found five residents – three asymptomatic and two with mild symptoms during the first outbreak – were more sick during the second outbreak, according to the study published in February 2021 by the Centers for Disease Control and Prevention.

“They’re still studying this issue but the data has congealed around a hypothesis that the more severe illness, the higher your level of neutralizing antibodies and lasting immunity,” Cameron said. “Asymptomatic and mild infections lead to less robust immune responses.”

It’s likely more COVID-19 cases are asymptomatic today compared to when the study was conducted, health experts say, due to highly transmissible variants like delta and omicron.

Vaccines themselves may also contribute to a higher proportion of asymptomatic infections, Wells said, as they’re extremely effective against severe disease and mute the symptoms of a breakthrough infection.

The best protection against COVID-19 remains getting a vaccine and booster, said Dr. Shiv Pillai, immunologist and professor of medicine at Harvard Medical School.

“No one is not getting protected from infection, but it’s not very long lasting,” he said. “It’s always better to get vaccinated.”

Don't Miss it One chart shows the most common COVID-19 booster side effects from Pfizer, Moderna, and J&J’s vaccines
Up Next Biden smirks when Post asks about pushing China for COVID-19 origins