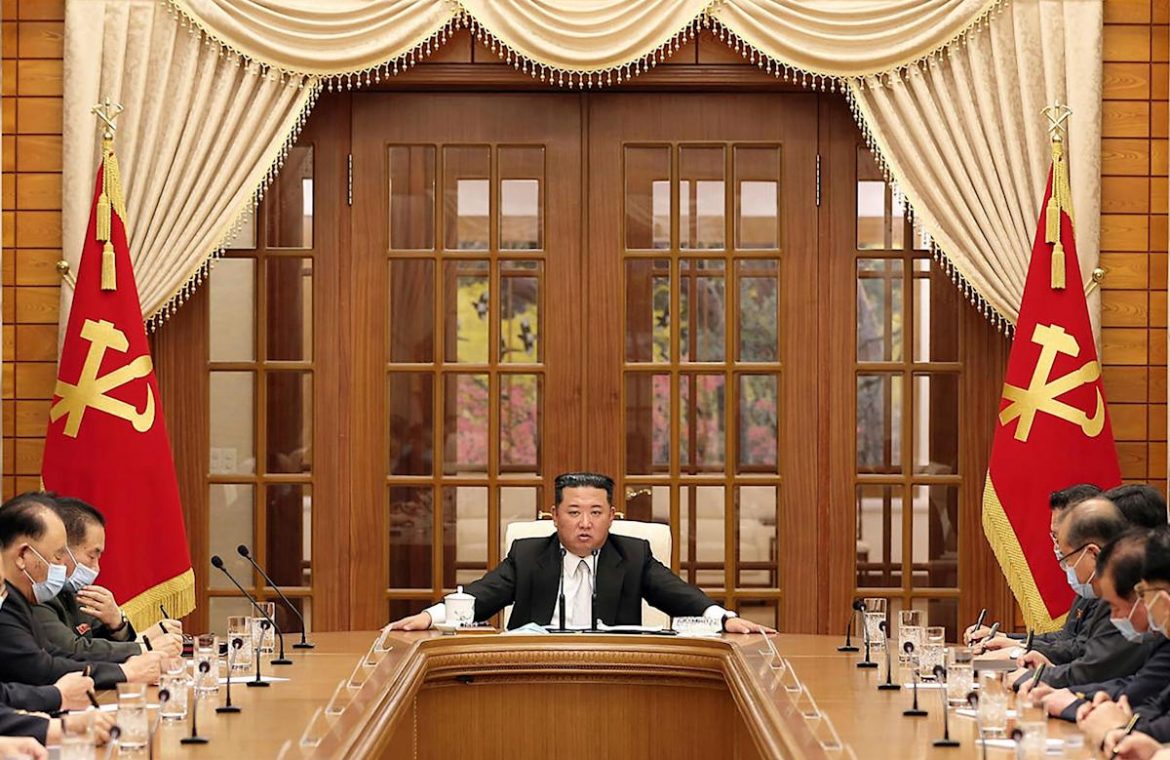 The North’s official Korean Central News Agency said tests from an unspecified number of people with fevers in the capital Pyongyang confirmed they were infected with the omicron variant. North Korea had previously claimed a perfect record in keeping out COVID-19, a claim widely doubted by outside experts.

The country’s population of 26 million is believed to be mostly unvaccinated, after its government shunned vaccines offered by the U.N.-backed COVAX distribution program, possibly because those have international monitoring requirements.

KCNA said Kim called a meeting of the ruling Korean Workers’ Party’s Politburo where members decided to raise its anti-virus measures. Kim during the meeting called for officials to stabilize transmissions and eliminate the infection source as fast as possible.

Despite the decision to elevate anti-virus steps, Kim ordered officials to push ahead with scheduled construction, agricultural development and other state projects while bolstering the country’s defense postures to avoid any security vacuum.

Kim said officials must also formulate steps to ease any public inconveniences and other negative situations that could flare as a result of the boosted anti-pandemic measures. Kim said that “the single-minded public unity is the most powerful guarantee that can win in this anti-pandemic fight,” KCNA said.

North Korea was one of the last places in the world without an acknowledged virus case. Turkmenistan, a similarly secretive and authoritarian nation in Central Asia, has reported no cases to the World Health Organization, though its claim also is widely doubted by outside experts. In recent months, some Pacific island nations that kept the virus out by their geographic isolation have recorded outbreaks.

Experts say a major COVID-19 outbreak would have devastating consequences because of North Korea’s poor health care system and could possibly trigger instability when combined with other problems like serious food shortages.

North Korea’s previous coronavirus-free claim had been disputed by many foreign experts. But South Korean officials have said North Korea had likely avoided a huge outbreak, in part because it instituted strict virus controls almost from the start of the pandemic.

Early in 2020 — before the coronavirus spread around the world — North Korea took severe steps to keep out the virus and described them as a matter of “national existence. It quarantined people with symptoms resembling COVID-19 and all but halted cross-border traffic and trade for two years and is even believed to have ordered troops to shoot on sight any trespassers who crossed its borders.

The extreme border closures further shocked an economy already damaged by decades of mismanagement and crippling U.S.-led sanctions over its nuclear weapons and missile program, pushing Kim to perhaps the toughest moment of his rule since he took power in 2011.

North Korea in January tentatively reopened railroad freight traffic between its border town of Sinuiju and China’s Dandong, but China announced a halt to the trade last month as it deals with a spread of COVID-19 in Dandong.

It’s unusual for North Korea to admit the outbreak of any infectious disease though Kim has occasionally been candid about national and social problems and policy failures.

During a flu pandemic in 2009 when the country was ruled by his father, Kim Jong Il, North Korea said that nine people in Pyongyang and the northwestern border town of Sinuiju had contracted the flu. Some outside experts said at the time the admission was aimed at winning outside aid.

Experts say Kim Jong Un still hasn’t publicly asked for any aid including COVID-19 vaccines from the United States and South Korea amid the prolonged stalemate in nuclear diplomacy.

Don't Miss it Data shows vaccinated U.S. citizens made up more than 40% of COVID-19 deaths during omicron peak, as deaths continue to rise in Wisconsin
Up Next North Korea announces its first COVID-19 outbreak