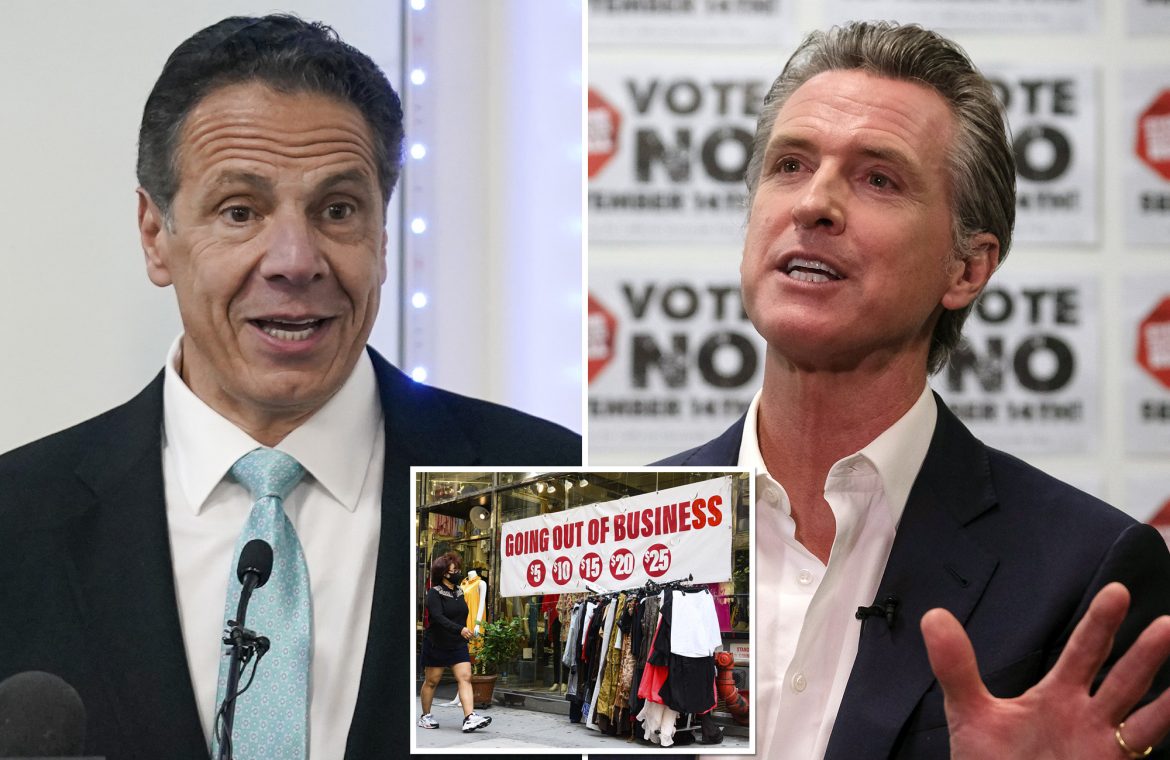 New York, New Jersey and California failed in their handling of the COVID-19 pandemic because of stringent lockdowns and policies, while Florida was among the best-performing states in the country, a new study has found.

The study, published by the Committee To Unleash Prosperity, graded states by comparing COVID-19 outcomes based on the number of deaths, the economy and impact on education.

Overall, the bottom 10 on the study’s “report card” were dominated by states that had the most severe pandemic lockdowns and were among the last to finally reopen schools.

“Shutting down their economies and schools was by far the biggest mistake governors and state officials made during COVID, particularly in blue states,” Stephen Moore, one of the study’s authors and co-founder of the Committee To Unleash Prosperity, said Monday.

Despite now-disgraced former Gov. Andrew Cuomo initially being hailed for his strict response to the pandemic, the Empire State performed “poorly on every measure” — ranking 49th overall, according to the study.

New Jersey was the worst-performing state, the study found. Other places that also received an F grade included California, Illinois and Washington, DC.

A new study has found that states that had Democratic leadership during the COVID-19 pandemic fared worse than those with Republican leadership. FREDERIC J. BROWN/AFP via Getty Images

A person wearing a protective face mask walks by a retail store in Midtown as the city continues Phase 4 of reopening following restrictions imposed to slow the spread of coronavirus on September 8, 2020.Noam Galai/Getty Images

“They had high age-adjusted death rates, they had high unemployment and significant GDP losses, and they kept their schools shut down much longer than almost all other states,” the study said.

Utah, Nebraska, Vermont and Florida — all governed by Republicans — topped the list.

The study found that the states that locked down businesses, churches, schools and restaurants for lengthy periods did not have lower death rates than those that largely remained open.

According to the study, California came in 27th in terms of deaths during the COVID-19 crisis. Gov. Newsom is pictured here.AP Photo/Ringo H.W. Chiu

Nursing home policies may explain the poor mortality rates in some states, such as New Jersey and New York, where Cuomo faced backlash for an order that directed nursing homes to take COVID-19 patients.

Meanwhile, Florida, whose GOP Gov. Ron DeSantis did away with COVID restrictions earlier on in the pandemic, ranked 28th in mortality, the study found. In comparison, heavily locked-down California came in 27th in terms of deaths.

Keeping schools closed had no impact on the number of deaths in children or adults, according to the study.

“The states that locked down their economies have had unemployment rates on average about two percentage points higher than states that did not engage in severe lockdowns,” the researchers added.

“These high state unemployment rates have persisted for two years now. Most lockdown states have still not fully recovered the jobs lost in the early months of COVID.”

New York ranked 33rd for the least impact to education and second-to-last for its economic performance. California was ranked 50th for its education disruptions and 40th for the economy.

Comparatively, Florida was third for the least impact to education and 13th in economic performance.

The study was authored by University of Chicago economist Casey Mulligan, Stephen Moore of the Heritage Foundation and Phil Kerpen from the Committee to Unleash Prosperity.

The report card results were also published by the National Bureau of Economic Research.