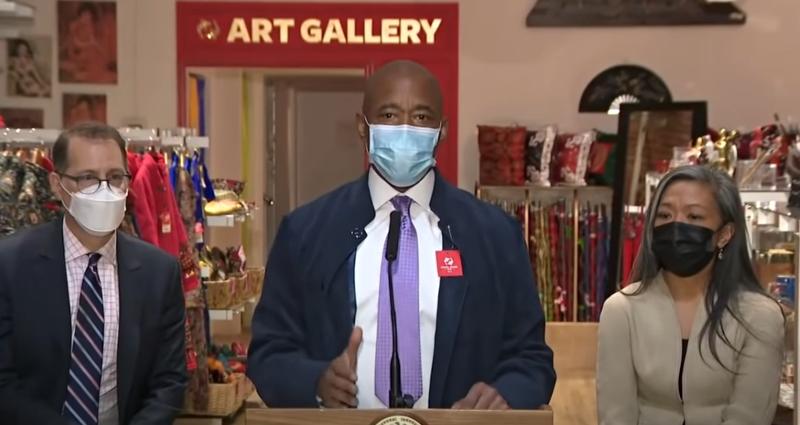 “The president right now should stand up and say, ‘On behalf of the American people, we apologize to the Chinese community,’” Adams said. “We had a president that called COVID the ‘Chinese disease.’ He used hatred terminology. This is a big moment for our country: that we would never allow the Oval Office to be used to attack people in our country.”

Adams, who was sworn into office early Saturday, was responding to a reporter who asked how Biden should address anti-Asian attacks “more broadly” and how he could “try to reach out to the Asian American community.” Since the onset of COVID-19, New York has seen countless anti-Asian incidents, which most Asian Americans attribute to former President Donald Trump’s use of controversial terms such as “Chinese virus,” “Wuhan virus” and “Kung Flu.”

“I’m hoping he [Biden] will say to the Chinese residents of this country that we apologize for what was said and what was done,” Adams continued. “We’ve turned people against the Chinese community during COVID.”

The newly minted mayor said the city still received over 200,000 personal protective equipment (PPEs) from the Chinese community despite the surge in attacks and lack of business. “They showed us what it meant to be an American,” he added.

Adams said he will send a letter to Biden about the apology request.

Last month, the president launched a new initiative on Asian Americans, Native Hawaiians and Pacific Islanders (AANHPI) that will focus on coordinating a comprehensive federal response to the rise in anti-Asian violence, among other tasks.

Additionally, New York Gov. Kathy Hochul (D-N.Y.) has recently signed a package of legislation that targets racism and discrimination. One of the bills aims to disaggregate Asian American data by ethnic group, which sponsors believe would improve the understanding of AAPI experiences and potentially result in a reduction of anti-Asian hate.

During Tuesday’s press briefing, Adams issued an executive order that will identify and address the most common violations that affect small businesses in Chinatown and throughout the city.

‘What are you doing here, Asian?’: Three suspects sought by police for group attack on NYC man

Over 60 Volunteers Are Now Patrolling Flushing for Anti-Asian Violence