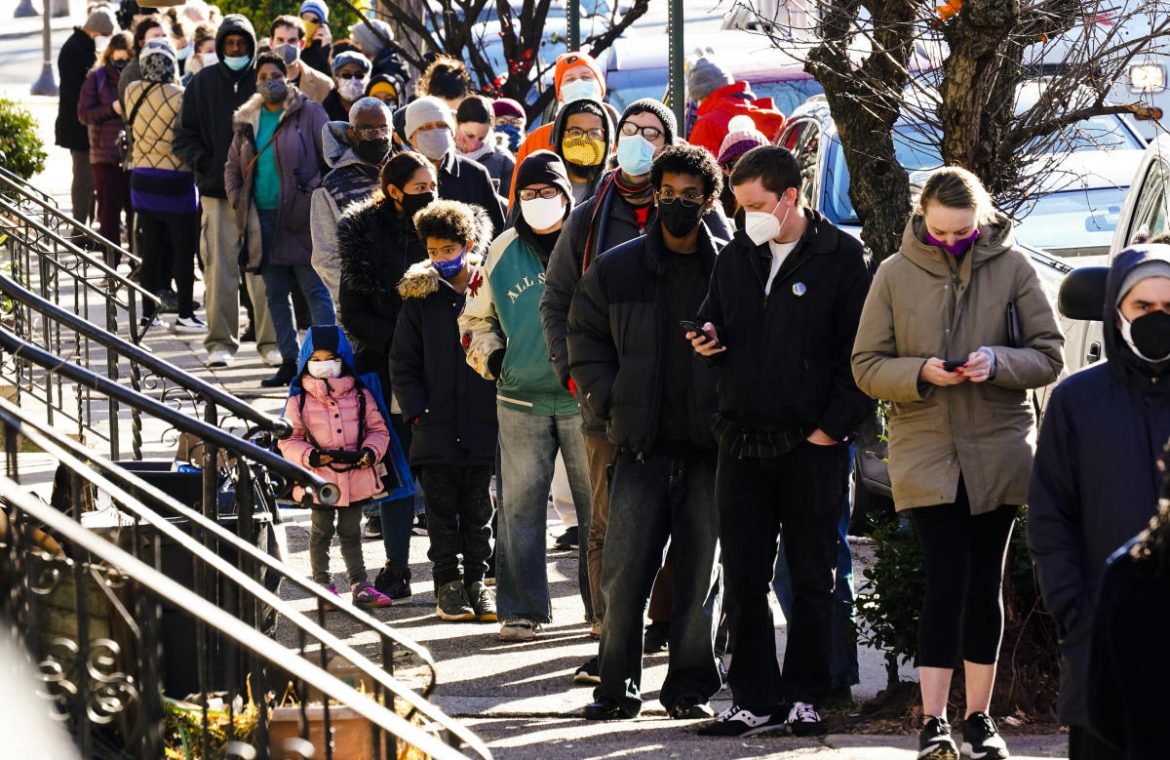 Rona MacInnes, 54, was determined to do everything possible to protect her elderly mother as her family prepared to gather for Christmas in Pennington, N.J.

With her son returning from study in Dublin, MacInnes hoped serial at-home coronavirus tests would catch a coronavirus infection he might bring home. The college junior would take six rapid tests before the holiday, all of which returned negative results. But it would become clear only later – after he had spent time with his grandmother – that he had been infected the whole time. Several days after gathering for Christmas, he got a positive result back from the first available lab-based PCR test he was able to book.

The result floored and frightened MacInnes, creating fresh worries about her 80-year-old mother. The family quickly booked an appointment to get a PCR test for her mother that came back negative.

“Thankfully none of us have developed symptoms,” MacInnes said.

The promise of at-home tests to tell people whether they are infectious has been undercut not just by anecdotal reports like MacInnes’s, but by preliminary data that suggest some of the rapid tests may be less sensitive to the now-dominant omicron variant. Studies suggest they detect infections most reliably two to five days after exposure in people with high viral loads who are experiencing symptoms, which is why people are urged to take the tests serially. But even then, they are not foolproof. And for those who have taken pains to find out if their sniffle and sore throat might be harbingers of covid-19 to protect others, contradictory test results are often dismaying.

A New York woman who relied on negative rapid test results to go out with her friends on New Year’s Eve only to get back a positive PCR test result afterward said she believes the at-home tests offer “a false sense of security.”

The Food and Drug Administration acknowledged the issue on Dec. 28, noting that “early data suggests that antigen tests do detect the omicron variant but may have reduced sensitivity.” A week later, a small preprint study that has not yet been peer-reviewed found the rapid tests failed to detect the virus on day zero and day one after infection for 30 individuals in New York and San Francisco. In 28 of those cases, PCR tests indicated that the patients’ virus levels were high enough on those days to make them infectious. (Several authors of the study serve as unpaid board members of SalivaDirect, a PCR test protocol affiliated with the Yale School of Public Health.)

A much larger preprint study from researchers in California that looked at 731 samples found that Abbott’s BinaxNOW rapid test performed about as well in detecting infections caused by the omicron variant as it had for those caused by other variants, especially among people with symptoms. But the tests failed to detect about 10% of lab-confirmed positive cases among asymptomatic people, who may have been tested very early in their infections.

“Our data support the recommendation for repeat rapid antigen testing for persons at risk for covid-19 who have an initial negative BinaxNOW result,” the researchers said.

Public health experts say that at-home tests were never expected to be as sensitive as the PCR tests performed in a lab or clinic because of the different ways they work.

The PCR tests use a technique called polymerase chain reaction to amplify trace amounts of virus DNA. While they’re considered the gold standard for detecting infection, it can take 12 hours to several days to deliver results and cost $150 or more without insurance coverage.

By comparison, rapid tests, also called antigen tests, are cheaper and most people can administer them at home. They return results in as little as 15 minutes by detecting antigens, a type of protein on the surface of the virus. But since rapid tests don’t magnify the virus, a person needs to have produced enough antigens in their body to return a positive result.

The good news, researchers say, is that two newly authorized rapid tests coming to market later this month work well in detecting omicron, the now-dominant variant. The FDA issued emergency use authorizations for the tests by Roche and Siemens Healthineers in late December.

“Help is on the way,” said Wilbur Lam, a physician and biomedical engineer at Emory University who runs the lab tasked by the National Institutes of Health with evaluating the performance of the rapid tests on the market. “The two new [tests] coming out perform really well.”

Lam leads the Atlanta Center for Microsystems Engineered Point-of-Care Technologies, which the government enlisted to evaluate coronavirus tests beginning in March 2020. He has no affiliation with Roche or Siemens.

Lam explained that each antigen test uses different lab-made antibodies, which “act like glue to ‘capture’ and detect virus,” and some are better at detecting omicron than others. He said his lab has been evaluating all of the existing tests, including the new ones from Roche and Siemens, to see how they stack up against the omicron variant.

“It happens that these two new tests have very good antibodies that ‘stick’ very well to the virus, likely better than the antibodies of other tests on the market,” Lam added.

Consumers will be able to purchase Roche tests beginning in late January, spokeswoman Michelle Johnson said in an email. A Siemens spokesman said it is too early to say when its tests will reach stores, but production is already ramping up. Both companies are expected to produce tens of millions of at-home test kits each month, helping to boost the nation’s supply of rapid tests.

Lam said that when the omicron variant first reached the United States in mid-November, he and his colleagues used inactivated virus samples to test all of the rapid tests on the market. All performed well. But when they began evaluating the tests against live samples of omicron, some of the tests appeared to be less sensitive to the variant.

“There could be a bunch of different reasons for this,” Lam said.

Some substrains of the variant may produce less of the antigen that the tests are designed to detect. And differences among patients – their vaccination status, severity of infection and how long they’ve had symptoms – may also affect how well the tests work.

“All these things are still theoretical,” Lam said of the early findings. “And we just need to do more rigorous testing.”

Omicron may also proliferate in different parts of the body than other variants, sparking some debate over whether people should rely on nasal swabs or throat swabs for antigen tests. The FDA has advised against doing throat swabs because it says the rapid tests were not designed for them.

After a New Year’s Eve spent among four friends who all tested before gathering, a painful headache and dry cough spurred a 58-year-old New York City woman to take another rapid test on Wednesday. The test came back negative, but her symptoms persisted, so she decided to get a PCR test on Thursday.

The PCR test came back positive.

“Everybody thought, ‘We’re going to test – that’s the key to freedom,’ ” said the woman, who spoke on the condition of anonymity because she is in interviews to change jobs. “And the problem is, if people are getting these false negatives, they’re adding to the spread.”

Because a person’s virus levels fluctuate over the course of an infection and the rapid tests do not magnify tiny bits of virus, experts say that a single negative rapid test result does not preclude that an individual is infected. That’s why they advise the tests be used serially – at least two over the course of several days, although that can be difficult because the tests are costly and still in short supply. With the omicron variant, infected people also appear less likely to return positive results during the first day or two of symptoms.

“Some people turn positive two days after exposure, some three days, some four days, some five days,” said William Schaffner, professor of infectious diseases and preventive medicine at Vanderbilt University. “All of this leads to a great deal of confusion.”

That uncertainty is why the tests were never designed to be used “as a ‘Get Out of Jail Free card,’ ” to leave quarantine or isolation, he added.

False positives from rapid tests are much less likely, although they happen occasionally, Schaffner said. “If you use any test in a population where the risk of having a true positive is very, very, very low, you can get false positive results just by chance alone, because no test is perfect,” he said.

But many experts say that a positive result from a rapid test should always be treated as a true positive.

That is especially true because infections caused by the omicron variant appear to move faster than those caused by other variants, said Lam, the Emory biomedical engineer. A positive result on a rapid test followed by a negative result on a PCR test may mean that a patient was infected, but stopped producing virus by the time of the second test, he added.

As the omicron semester starts, online or in person, colleges are tense

Still looking for a ‘Black mecca,’ the new Great Migration

Deep in the Australian bush, a scientific quest to uncover a hidden koala enclave

Don't Miss it Xi Jinping calls for world cooperation on COVID-19 despite secrecy over origins
Up Next COVID-19 health emergency could be over this year, WHO says