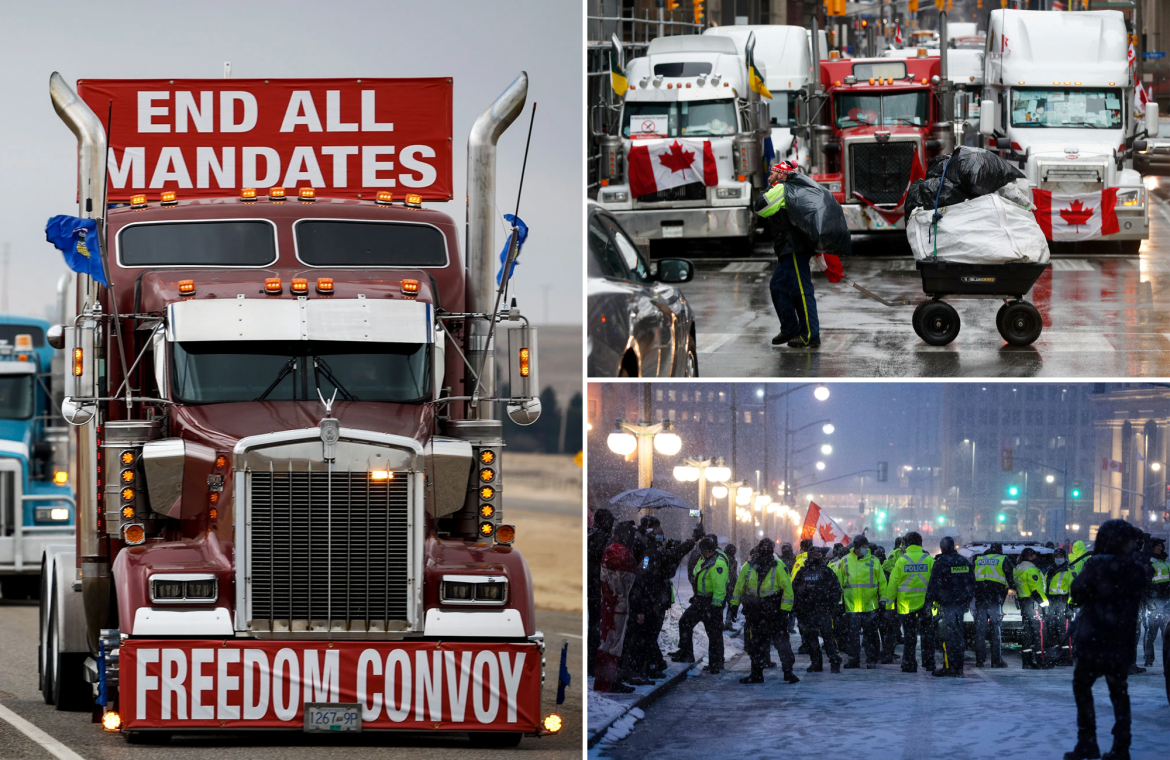 A group of US trucker convoys — inspired by the weeks-long demonstrations north of the border — are joining protests against COVID-19 restrictions and mandates in several cities.

The political action committee said it was launching the motorcades in the first month of March. One would travel from California through the Southwest and Deep South to DC. Two others would originate in Ohio and end in the capital.

“I don’t think that anybody wants to be told what to do,” Erica Knight, GAPP spokeswoman, told Fox News. “They don’t want to deal with these mandates and it’s kind of a way to stand up for all the American people against it.”

The initiative came as Canadian law enforcement was set to use emergency measures to disperse truck drivers from their occupation of central Ottawa, where they had paralyzed traffic in the capitol since late January. Their “Freedom Convoy” compatriots had abandoned the last trucker blockade at US borders on Wednesday.

Police on Rideau Street after making an arrest, during an ongoing protest against COVID-19 measures in Ottawa, Ontario, on Thursday, Feb. 17, 2022. AP

Protests against COVID-19 mandates have grown into a broader anti-government protest, in Ottawa, Ontario, on Thursday, Feb. 17, 2022. AP

Knight said that American truck drivers were inspired by the Canadian demonstrators, who were protesting vaccine requirements imposed on their solitary profession. Solo domestic truck drivers were not under federal vaccine mandates in the US.

Donations made through the PAC would avoid the “limitations” of sites like GoFundMe, which had blocked the release of almost $10 million in donations to Canadian protestors two weeks ago, citing “the promotion of violence and harassment” in Ottawa.

Facebook pages promoting convoys had also been removed by the social network over references to conspiracy theories and links to extremist groups. Some pages had been generated by overseas content farms, parent company Meta said.

City officials negotiated to move trucks towards Parliament and away from downtown residences, on the 18th day of COVID-19 protests.AP

A myriad of other movements promoting a run on Washington continued to spread online as prominent US Republicans offered support for the Canadian protestors.

The US truckers represented by the GAPP were “peaceful, non-violent Americans who are dissatisfied with the unscientific, unconstitutional government overreach in regards to mandates,” the website said.

“It’s time for #AmericanTruckers to stand with truckers all over the world. Don’t be afraid to #HonkHonk. Everybody loves #FreedomHonks.”